Potentilla is a genus of lovely flowering shrubs and small perennials from the family of Rose. These summer flowering shrubs make excellent plants for beginners. Most species, such as Potentilla fruticosa,  grow in almost any soil and are resistant to pests.

Potentilla fruticosa (Buy online) grows from 1 to 3 feet in height and produces attractive yellow flowers in late spring. Flowering continues till early days of fall. Potentilla fruticosa can be used to border plants, cover the ground in mass plantation schemes or as an outdoor ornamental plant. The ornamental value of the plant is because of its compact silvery-green leaves and attractive yellow flowers. 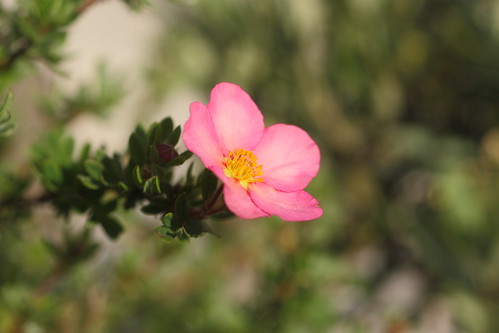 How to Grow Potentilla fruticosa

Potentilla fruticosa like other plants in its genus prefers bright sunlight, regular watering and a well-drained soil. To keep the plant in shape, it is advised to prune annually at the end of the flowering season. When grown in colder climates, reduce or stop watering during the freezing period. Most Potentillas can be grown from softwood cuttings or divisions. Popular varieties include:

P. fruticosa ‘Abbotswood’ is grown as a hardy flowering shrub that produces abundance of white flowers.

P. parvifolia ‘Goldfinger’ is known for its large and prominent yellow flowers.

P. fruticosa ‘Goldstar’ grows as a compact and low-growing flowering shrub. It is suitable for growing as a ground cover. Flowers are yellow. 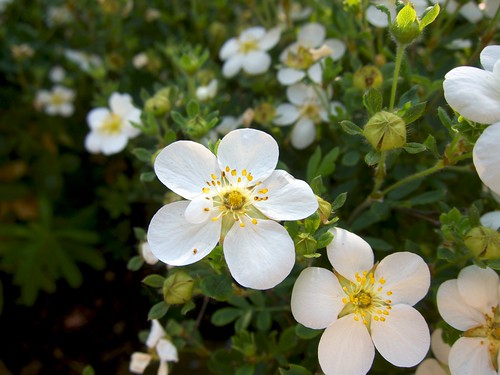 P. fruticosa ‘Pink Beauty’ is the most beautiful flowering shrub in this genus. It is known for its lovely pink flowers.

While the fall season has come and most trees are turning their royal green attire in to a cover of orange, red and yellow. It is time to enjoy beautiful show of fall-blooming Colchicum. 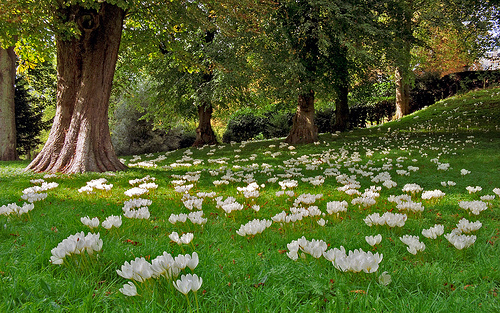 Colchicum is a genus of fall blooming bulbs known for their lovely white, pink, and purple flowers that appear in the months when very few plants bloom.

Usually known as Autumn crocus or Meadow saffron, Colchicum is a low growing plant that sprouts from small bulbs and produces small stems (10 to 15 cm high) terminated by a star-shaped flower. Since it does not produce any foliage, the plant is also described as naked lily. 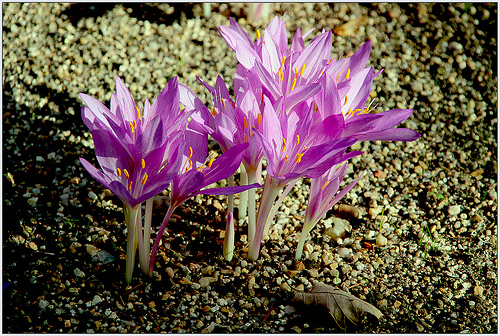 How to Grow Colchicum

Colchicums make excellent plants for cold climates where they can be grown in a rich and slightly moist soil. Most species benefit from partial sunlight and occasional feeding. The bulbs can be planted in late summer. Bulbs divided rapidly and can be separated and stored for planting next year. 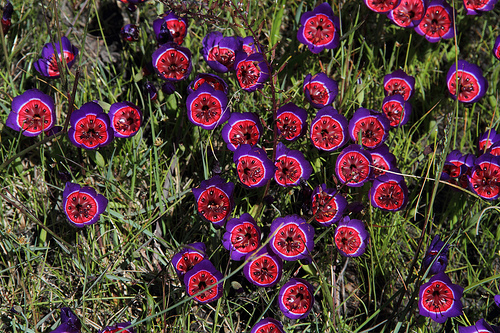 The lovely plants in these pictures belong to the genus of Geissorhiza  – a genus of about 80 species known for their attractive flowers. Grown from seeds or corms, these lovely bloomers make excellent pot plants for winter.

Most species of Geissorhiza are low-growing plants and can be grown in small pots. They need constant moisture during the winter and require complete drought in the summer. Geissorhizas also make good plants for mass plantation in landscapes. 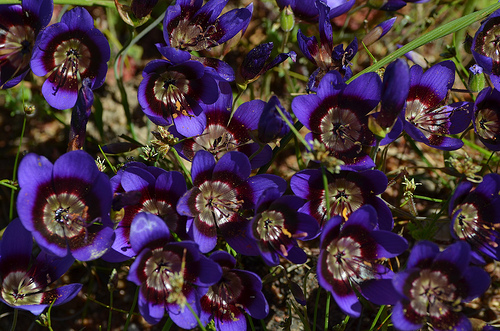 Phygelius is a small genus of ornamental bloomers from South Africa. These cold hardy plants make excellent border plants that grow up to 1 meter and produce and produce long spikes of fuchsia-like flowers. They can also be grown in large pots and hanging baskets in semi-shaded or sunny spots.

Phygelius are grown as evergreen shrubs or as perennials in colder climates for their ability to produce abundance of tubular flowers that usually appear in summer and stay for a long time. Flowers are orange or red.

In their natural habitat, Phygelius grow in shade near water. Therefore, they prefer slightly moist and semi-shaded spots.

Though only two species, P. capensis and P.aequalis, are found in nature, a number of interesting cultivars and hybrids of Phygelius are commercially sold. The popular varieties include:

The plant featured today is Globularia cordifolia. Commonly known as Globe Daisy, Globularia cordifolia is a low growing, evergreen and mat forming plant that grows widely across Europe, and parts of Africa and Asia. Globe Daisy is grown in gardens as ground cover or as border plant because of its evergreen and low growing habit. It is also grown in rock gardens for its ability to survive long spells of drought. 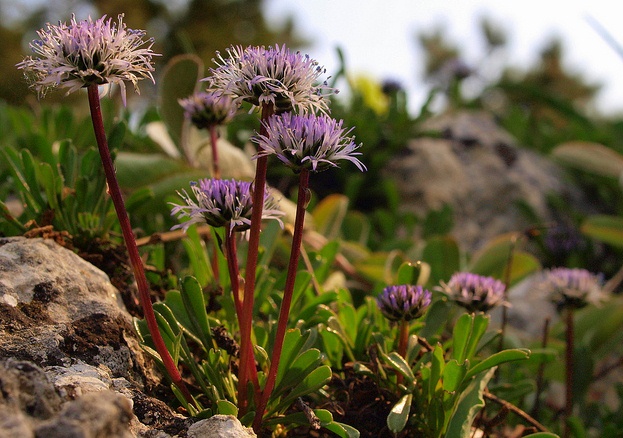 Globularia cordifolia prefers sunny exposure and moderate watering in a well-drained soil. The plant grows up to 6 inches and tends to spread across 12 inches to form a thick mat of leathery leaves. From the mat of dense leaves, appear slightly taller stems that bear beautiful flowers in early summer or late spring. Flowers usually have mauve or pale lilac colors. These flowers last long and create a beautiful display in landscapes and gardens.

Other popular species in the genus include:

Globularia meridionalis – Another evergreen perennial with glossy green leaves and lavender blue flowers. The plant is quite easy to grow in Mediterranean climate.

Symphoricarpos is a genus of deciduous shrubs known for their beautiful berry-like white fruit. Originally native to North America, these hardy shrubs can be grown in many different climatic conditions. Most species of Symphoricarpos prefer full to partial sun, average watering and almost any type of soil that does not retain water. 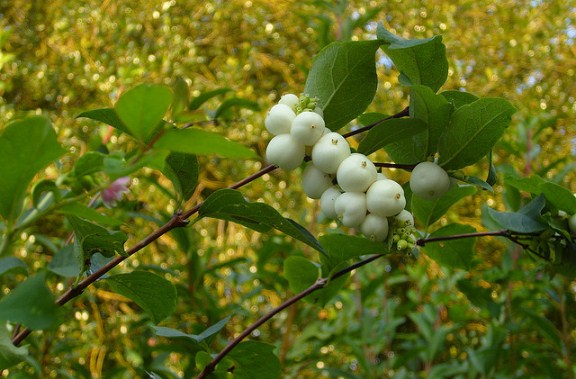 Symphoricarpos albus is capable of resisting frost and survive long spells of winter. The plant can be used in hedges and borders as a low-maintenance shrub.

Common names of Symphoricarpos albus include Snowberry and Waxberry.

The plant in picture is Luculia gratissima – an excellent bloomer and ornamental shrub from south Asia particularly from the Himalayas. Luculia gratissima belongs to the family of popular flowering shrubs and trees including Ixora, Gardenia and Hamelia. It is an evergreen shrub or small tree (up to 5 meters) that bears beautiful glossy leaves and produces abundance of fragrant flower in fall and winter. The masses of pink flowers spread delightful and jasmine-like scent.

Luculia gratissima is a bit difficult to grow in garden in garden as it thrives in a very limited spectrum of day and night temperature (between 28 to 80 F). It also requires long exposure to indirect sunlight, higher level of moisture and well-drained soil.

Though a bit difficult to grow, Luculia gratissima is a very rewarding plant that produces long lasting and fragrant winter flowering. It is usually propagated from seeds or hardwood cuttings. Other popular species include: Luculia grandiflora and L. intermedia.

Lycoris is a small genus of bulbous plants known for their colorful and exceptionally beautiful flowers of all shades of pink, orange, red, white and yellow. They are quite easy to grow plants that just require a deep, rich and moist soil, with some warmth in summer. Most species of Lycoris belong to Japan, Korea, China and northern parts of Pakistan.

Lycoris can be grown in containers but preferably in raised beds where they would often form large clumps of bulbous plants. As with other plants in the Lily family, flowers of Lycoris grown on long stalks making them good background plants in mix flower beds. 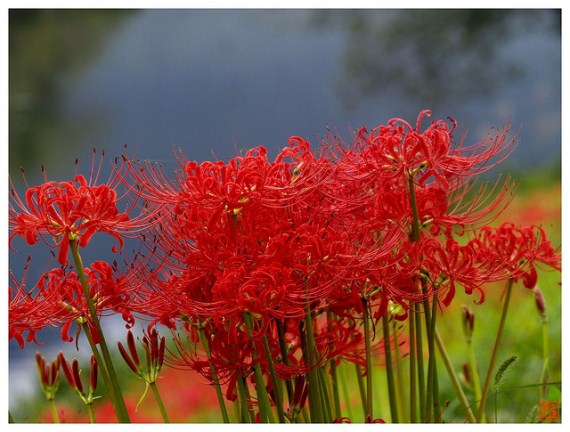 Popular species of Lycoris include:

Lycoris squamigera – A cold hardy plant with large pink flowers that appear in late summer. The plant is also known as Magic Lily, Surprise Lily or Resurrection Lily because its flowers appear after the leaves have totally disappear during the summer and flowers appear from seemingly dead bulbs.

Dudleya is a small genus of rosette-forming succulent plants form California and Mexico. Grown for their lovely formation, most Dudleyas are strikingly beautiful when grown in landscapes or as specimen plants. A Dudleya is usually characterized by a green or silvery-white, succulent leaves that grow on a short stem to form a small rosette. Most species remain solitary whereas only a few of them branch. Flowers of white, red or yellow color appear in late winter or early spring from the bottom, rarely from the center, of the rosette. 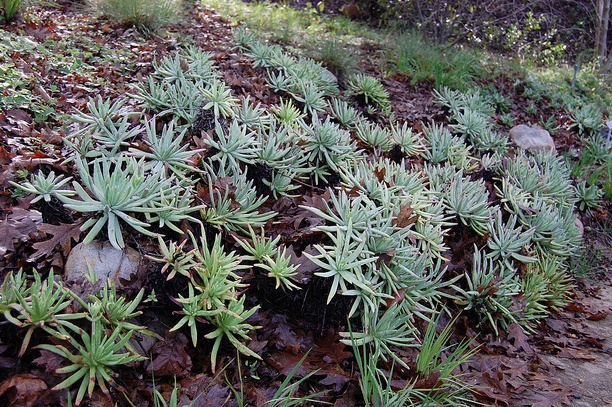 How to Grow Dudleya

Most species of Dudleya look similar to Echeveria which is another large genus of succulent plants but recently Dudleyas have been classified separately because of their flowering habit and growth pattern. They are winter-loving plants that usually go dormant is summer. They are quite hardy and drought resistant plants too thus making a good choice for rock gardens. When grown in landscape, most species of Dudleya tend to form thick clusters of small rosettes that add a dramatic look to the landscapes. Though, they can be grown as specimen plants, the best place to grow Dudleya plants is a tough landscape spot where very few plants can survive. Dudleyas would require good sunlight, a well-drained soil and small amount of water in winter (and barely sufficient moisture in summer). When provided with a congenial environment, Dudleya plants can grow for decades. For this reason, they are also known as ‘Live-Forever’.

Popular species of Dudleya include:

D. pulverulenta (Chalk Live Forever): Another large and solitary plant known for its beautiful foliage. It is quite hardy plant and can be grown as ornamental plant in landscape and rockeries. 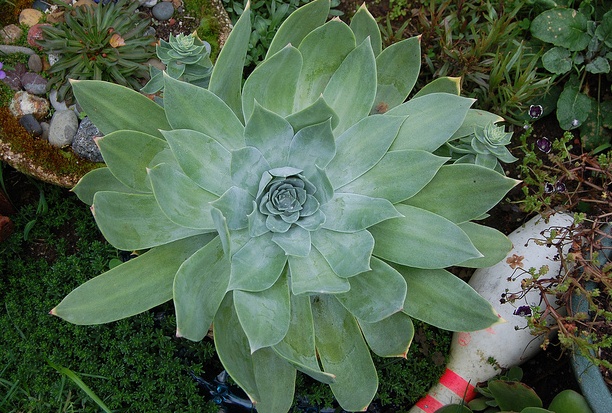 If you are looking for easy-to-care perennials for long flowering season, try Tradescantia. Tradescantia is a genus of low-growing plants that rapidly sprawl to form clusters of beautiful foliage. Originally native to Canada and the Americas, Tradescantia is grown as foliage plant, ground cover or hanging plant is cold climate gardens (-5 C to 30 C).

Tradescantia offers a wide variety of foliage plants with a long flowering season that usually starts in early summer and extends till early fall. These clump forming plant usually have self-seeding habit that is why, they spread quite rapidly. Most species of Tradescantia would benefit from a regular watering in regular but moist soil mix. 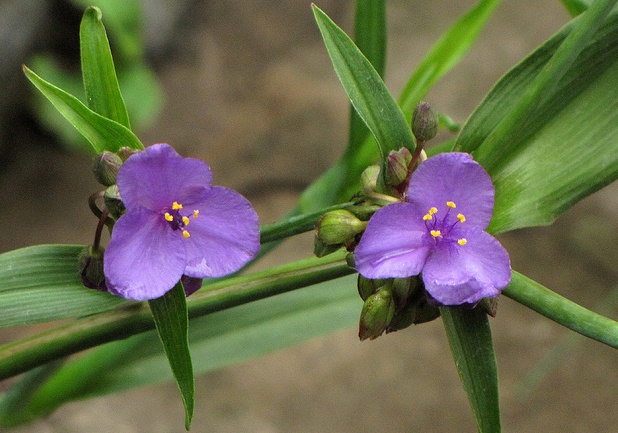 Because of their sprawling habit, most plant in the genus of Tradescantia make a good choice for garden borders, hanging baskets, containers or waterside landscape schemes. In places where you do not have sufficient room for these clump-forming plants, the best way to control them is cutting them back to the ground at the end of flowering season.

Popular species of Tradescantia include:

Tradescantia fluminensis – Usually known as Wandering Jew, T. fluminensis is a low-growing plant which is suitable as ground cover or hanging plant. The plant is easily propagated from cuttings and produces fresh green foliage.

Tradescantia comes from the family of Wandering Jew and is commonly described as Spiderwort.