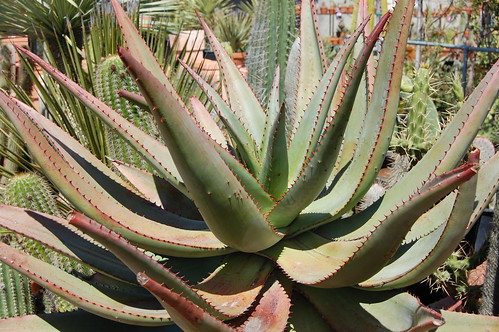 Aloe ferox is a hardy and attractive succulent known for its lovely flowers and medicinal value of the gel extracted from its leaves. If you are planning to design a xeriscape, Aloe ferox should be on top of your plants list for many reasons. It is a hardy succulent that does not require much care. It produces very attractive flowers of red, orange, yellow-orange and scarlet colors in mid-winter. When grown in groups, spikes of attractive flowers on Aloe ferox add striking colors to the landscape.

Aloe ferox originates from rocky and tropical regions of South Africa where it receives marginal rainfall and plenty of sun. When growing it in your garden or xeriscape, you need to imitate the similar climate. You can plant this hardy Aloe in a spot where it receives good amount of sunlight in a loamy and slightly sandy soil. Aloe ferox does not require frequent watering and should survive long spells of drought.

Aloe ferox (Buy seeds online) can grow up to 3 meters though it takes many years to attain this size. The plant produces fleshy leaves of dull green color. The leaves are arranged around the stem to form a rosette. Young leaves have prominent spines along the leaf margins and smaller spines on leaf surface. As the plant matures, older leaves dry up to expose main stem of the plant. The Greek name ‘ferox’ meaning ‘fierce’ is probably because of prominent spines on the leaves. 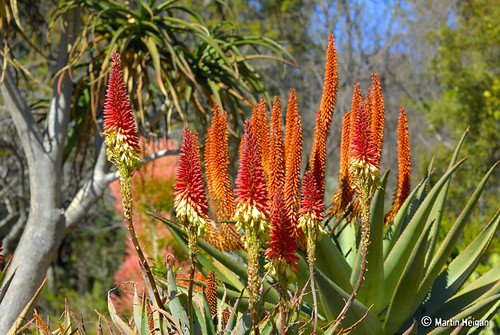 Aloe ferox produces abundant flowers that attract birds and bees as pollinating agents. Mid-winter is the time when this lovely Aloe begins to send out orange, scarlet, yellow-orange and red flowers giving the plant its common name, Red Aloe.

Aloe ferox is grown commercially for its medicinal value. The gel derived from its succulent leaves is used in cosmetics. The hard, brown excretions obtained from the plan are used for their laxative properties.

How to grow Aloe ferox from seeds

Aloe ferox can be propagated from seeds (Buy seeds online) that easily germinate when sown in a well-drained but slightly moist soil. Young seedlings should be kept lightly moist until they are 4- 6 cm in size.

Kalanchoe beharensis is an evergreen bush known for its distinct looks and unusual foliage. Gardeners and horticulturists like this plant because of its ability to grow in poor and sandy soil where it can be grown as an ornamental plant.

This lovely bush is characterized by knotted stem that bears large foliage of olive-green color. Each leaf is covered by velvety brown ‘hair’ underneath that make its felt-like surface. These succulent leaves assume triangular shape with crumpled edges. Because of their shape and furry shape, Kalanchoe beharensis is also known as Feltbush or Velvet Elephant Ear.

How to Grow Kalanchoe beharensis

Kalanchoe beharensis is native to Madagascar where it grows in warm and humid climate therefore it should be provided similar conditions to thrive well. In cold climates, it requires protection from frost and long spells of freeze. If you are growing it in areas that get a lot of frost, it is advised to move your plant in a greenhouse, or to a spot where it gets sufficient light but protection from frost and extremely cold conditions in winter.

Kalanchoe beharensis can be propagated from stem or leaf cutting. A mature plant can transform from a bush to a small succulent tree of 4 to 5 meters. Generally it is an easy plant to grown and maintain. Whether grown in a planter or ground, make sure that you water it only when the soil is completely dry.

I am a big fan of succulent plants – they are versatile, offer a great variety of shapes, sizes and colors, and are easy to group with their cousins. Traditionally, succulents have been grown in pots as display or accent plants. In recent years, they have become popular landscape plants. Modern landscape designers are now appreciating succulent plants for their architectural forms and using them in traditional as well as experimental landscape designs.

Most succulent plants grow solitary or form small groups. They rarely outgrow their environment and thus make good plants for grouping with their cousins. You can find succulent plants in all sizes – we ranging from mat-forming ground covers to low-growing foliage plants and from large globe-forming succulents to tall and cylindrical plants. Most succulent plants have similar requirements which makes it easier to group succulents plant from different genera in a landscape design. They require well-drained soil, less frequent watering, and occasional cutting or division.

Some common succulent plants that do very well in landscapes include several varieties of cacti and a large selection of plants from the genus of Aeonium, Agave, Aloe, Crassula, Echeveria, Euphorbia, Sedum, and Sempervivum.

The following gallery provides 15 good examples of landscape designs that use succulent plants.

The plant featured today is Kalanchoe orgyalis. It is a popular plant among landscape designers because of attractive colors and texture of the plant.

Kalanchoe orgyalis is characterized by succulent leaves that have tiny hair of copper-brown colors that gives its leave a felted substances and copper color. Fresh leaves have shiny copper color. As they grow old, they assume hues of silver making the plant even more attractive. Because of the shape and color of its leaves, Kalanchoe orgyalis is often known as Copper Spoons. 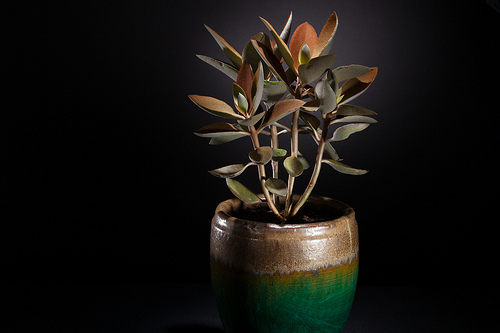 Like other plants of its genus, Kalanchoe orgyalis can be propagated easily from leaf cuttings.

Aloe brevifolia is a low-growing succulent and is usually grown as a beautiful ground cover or lovely pot plant. The plant forms beautiful rosette of grey-green leaves that grows up to 1 foot and produces lovely orange flowers on long spikes. In winter, leaves of Aloe brevifolia turn pink to add striking colors to the garden. 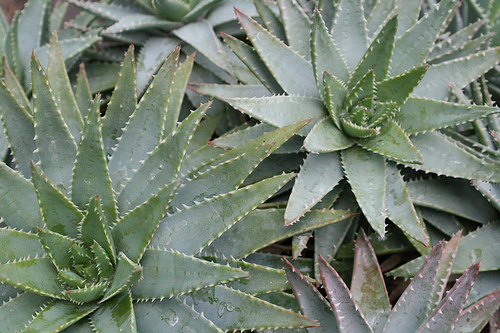 Aloe brevifolia// Image by Gardening in a Minute (flickr)

Unlike most Aloes, Aloe brevifolia is a smaller plant that seldom grows beyond 1 foot in height and width. The succulent leaves form compact rosette. Mature plants produce suckers near the bottom to form tight clumps making it a nice ground cover for landscapes. The flowers appear on long spikes that usually appear in spring and continue to bloom till mid-summer.

Because of its compact growth and showy succulent leaves, Aloe brevifolia can be used as effective ground cover or as small specimen plant grown in pots or rock gardens.

In its natural habitat, Aloe brevifolia grows in a coastal area and thus likes the similar environment. However, it is can adapt to various growing conditions. Ideally Aloe brevifolia should be grown under full or partial sun in a well-drained soil. Though the plant can withstand light frost, it should be protected from long spells of heavy frost in colder climates.

Aloe brevifolia is propagated from seeds or suckers.

Euphorbia rigida is a shrubby and evergreen, succulent from the Mediterranean climate. Known for its attractive spiral-forming foliage and ability to withstand drought, the plant makes a valuable addition to a rock garden. 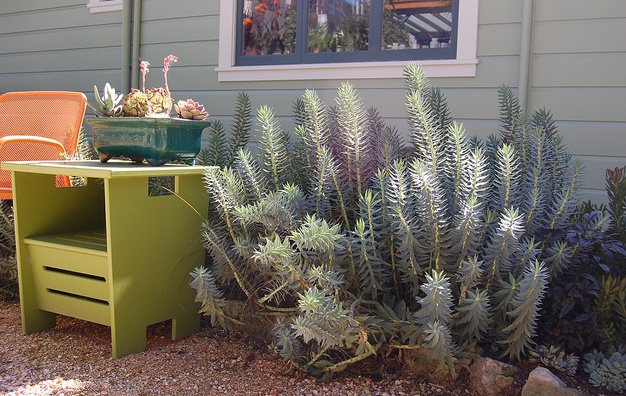 Commonly known as Gopher Plant, Euphorbia rigida forms clumps of upright ascending stems and grows up to 2 feet in height and 3 feet in width. The blue-green leaves of the plant form spiral formation around its stems that make this plant very attractive. Flowers of bright yellow color appear in spring followed by formation of seed pods. Gardeners usually prune spent flowers to prevent self-seeding. The plant itself can be pruned at the end of flowering season to prevent a leggy appearance.

Euphorbia rigida can be grown in raised beds, garden borders and rock gardens and as an excellent ground cover. It also performs well in containers and landscaping with other drought-tolerant plants.

Propagated from seeds or cuttings, Euphorbia rigida can be grown under prefer full sun to partial sun. The plant usually blooms well in rather poor or sandy soil.

Like other plants from Euphorbia family, the milky sap emitted by Euphorbia rigida can be toxic and may cause severe skin irritation.

Though I have not had much success with growing it, Titanopsis is one of my favorite succulents any day. My recent purchase was a couple of Titanopsis calcarea from Uwe Beyer a few months ago. So far they are doing well. 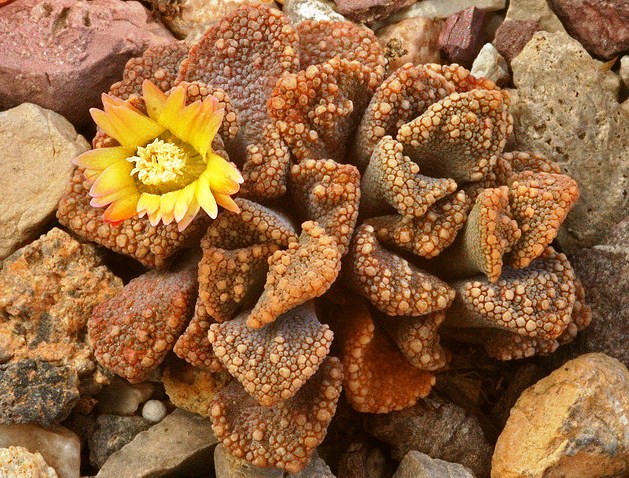 Titanopsis is a small genus of dwarf succulents from the family of Aizoaceae. Naturally growing in the Upper Karoo in South Africa, Titanopsis is an attractive but quite unusual plant because of its formation. The plant grows as a dwarf succulent and produces thick truncated leaves that have crumpled surface. These unusual leaves display all the hues of red, purple, green, cream and blue throughout the year. Flowers appear in late fall and winter. Like its cousins in the Aizoaceae family, Titanopsis produces small daisy-like flowers of yellow color.

Titanopsis grows to form clumps. These clumps can be divided for further propagation of the plant. Titanopsis calcarea, like other species, requires moderate watering during the growing season (late fall to early spring) and almost no water the rest of the year. These succulent plants prefer porous soils with excellent drainage. They are capable of tolerating both high (45° C or more) and low temperature (up to -10° C).

The best place to grow Titanopsis calcarea is a sunny spot where it gets bright sunlight in summer and direct exposure to the sun in winter. Other popular species of Titanopsis include: Titanopsis fulleri and Titanopsis primosii.

I just added a couple of new Haworthias in my succulent garden. I have recently bought a small collection of Mesembs (a couple of Titanopsis and a big bunch of Lithops). The plants have not yet acclimatized themselves. The weather has been quite cold for a couple of weeks (usually it does not drop below 5 ~ 6 Celsius in winter here), but the last few weeks have been quite cold and frosty. I do not know how they are going to respond to the change of climate (I live in a semi-arid climate with very hot summer and a humid spell of monsoon). 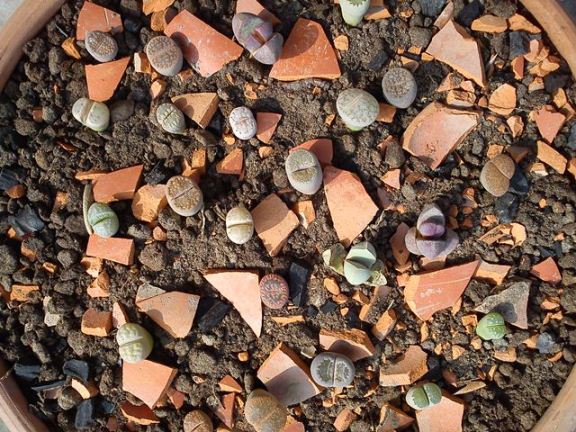 A bunch of Lithops 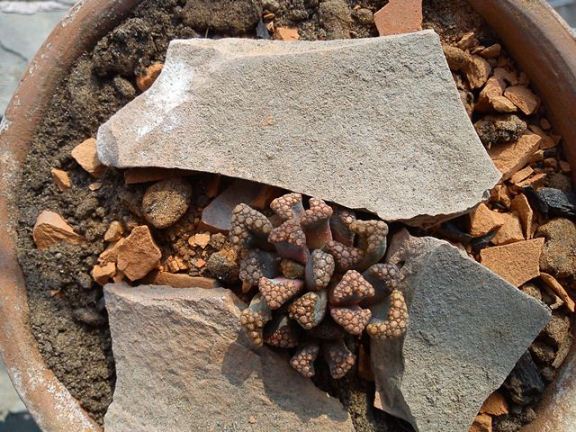 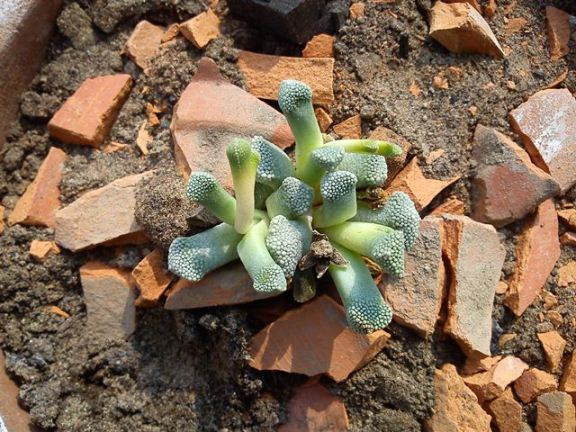 If you have any tips for growing Lithops and other Mesembs is sub-tropical climate, please share in the comments section below.

Aloe haworthioides as it is commonly known is a beautiful and miniature variety of Aloe. The plant is a hybrid of Aloe descoingsii and A. hawothioides.

Aloe haworthioides is an easy and fast growing plant that produces large clumps of miniature plants that grow very well in pots. The plant characterizes fresh green leaves marked with white spots and tiny bristles on their margins. 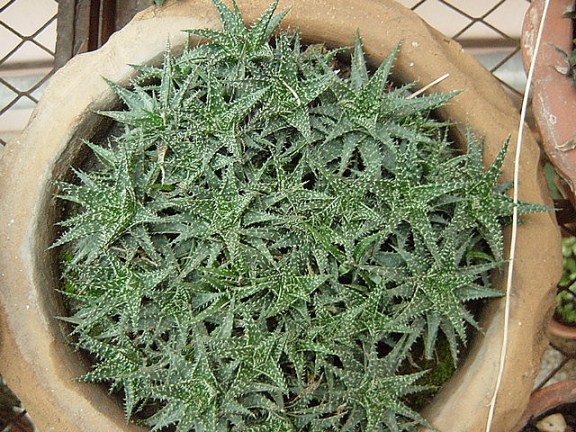 Aloe haworthioides is good as pot plant as well as an excellent choice for miniature gardens. It requires slightly moist but well drained soil. The plant can be grown propagated from divisions or seeds that germinate easily and form miniature plants quickly. Aloe haworthioides does not require much care and grows well under partial sun. Water generously when soil is completely dry in summer. In winter, keep these miniature plant protected from heavy frost and water barely sufficient to protect them from rot.

Like other species of this genus Aloe haworthioides produces small tubular flowers on a long stalk. Spring flowers are orange-pink that attract a lot of birds to the garden.