Lonicera sempervirens is a fast-growing vine from the famous Honeysuckle family. Also known as Carol honeysuckle and sometimes as Trumpet honeysuckle because of its trumpet shaped flowers, this lovely vine can be used as a nice climber for pergolas and trellis. 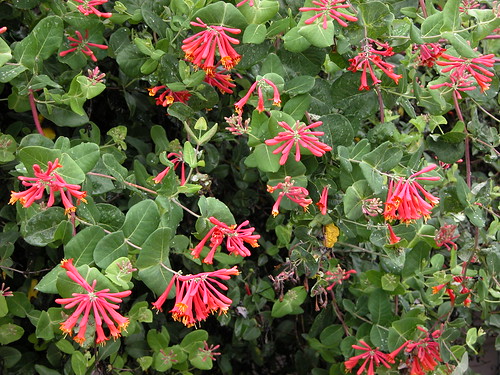 How to Grow Lonicera sempervirens

Lonicera sempervirens (Buy online) grows up to 5 feet and produces showy trumpet-shaped flowers of scarlet or red-orange color. Summer flowers are followed by red berries. Both flowers and berries attract wild birds. The vine grows in a well-drained soil under full sun. Though it can grow in shade, Lonicera sempervirens is primarily a sun loving vine. Brighter sunlight encourages abundance of ornamental flowers.

Lonicera sempervirens is a vigorous growing vine and might require annual pruning. It is evergreen in warm climates but sheds most of its foliage is colder climates. It can be propagated from layering or softwood cuttings.

Lonicera is a wonderful genus of climbers, ground covers and shrubs grown for their foliage and fragrant flowers. The plants in the genus of Lonicera are usually known as Honeysuckles. The genus includes two major types of plants – bushes and climbers.

The bush type honeysuckles make decent shrubs that can be used for hedges or garden borders. The climber type honeysuckles are often grown against walls, pergolas or trellis. Both type of honeysuckles require proper pruning to keep them in good shape. Most honeysuckles would grow under bright sunlight and in a rich, moist but well-drained soil.

Honeysuckles make good ornamental plants in small gardens as well as landscape designs where they grow under little care and produce unforgettably fragrant flowers in spring. 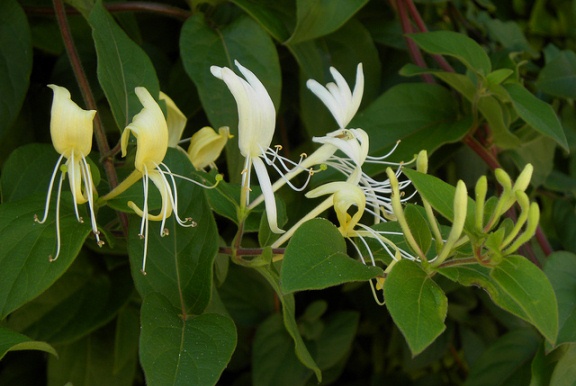 Popular species of honeysuckle include:

Lonicera caprifolium (Italian woodbine or goat-leaf honeysuckle) is a deciduous perennial that grows as vigorous climber (up to 8 meters). The plant produces abundance of strongly scented flowers of white and pink colors in midsummer.

Lonicera hildebrandiana (Giant honeysuckle) is an evergreen climber with large leaves and flowers. The flowers are yellow or orange that appear in spring.