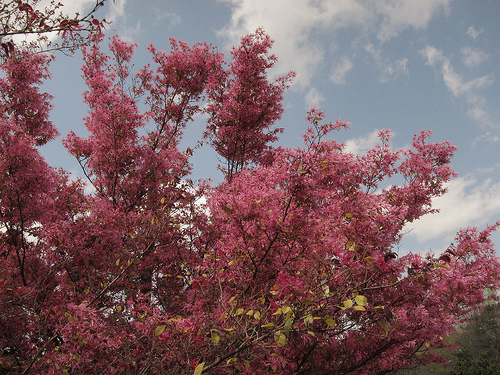 Loropetalum chinense is an evergreen shrub from the family of Witch Hazel. It is also known as Chinese fringe-flowers because of its fringe-like flowers that appear in spring and summer.

Loropetalum chinense is grown for its colorful foliage and prominent but unusual flowers. Commonly available species include a green-leafed variety that produced white flowers and burgundy-leafed variety that bears pink blossoms. Loropetalum chinense is a low-maintenance plant that does not require much attention. All it needs is a rich but slightly acidic soil, moderate watering and protection from extreme cold. Generally it would grow well in USDA zone 7 – 10. In colder climates, Loropetalum chinense should be moved to a greenhouse or provided with an indoor spot where it receives sufficient sunlight and hydrated only when the soil is completely dry. 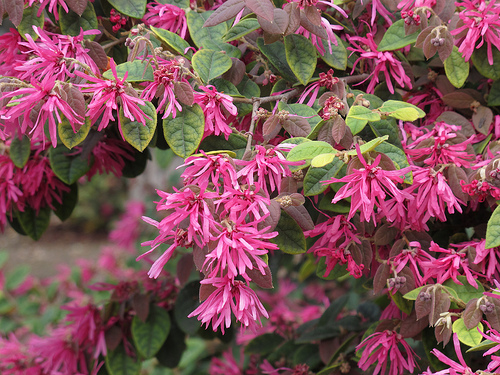 Gardeners and horticulturist use Loropetalum chinense as a colorful hedge that produces abundance of nice and colorful foliage. It can also be used to build privacy screen or to fill empty spots in large landscapes. With proper pruning, Loropetalum chinense can be grown into a small ornamental tree.

Flowering season begins as early as mid-March and lasts till summer. During this season, you can see Loropetalum chinense laden with eye-catching flowers that appear in small clusters. Each flower consists of ribbon-like, wavy petals that give it an unusual formation. 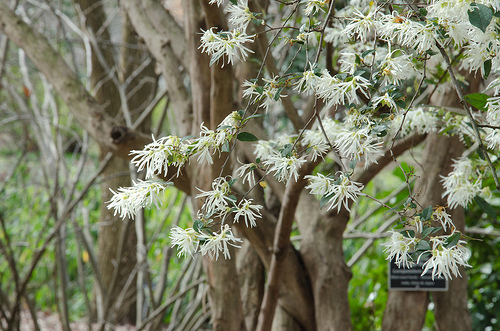 Besides popular green and burgundy-leafed varieties, a number of cultivars are easily available in market. These cultivars vary in flower size, and colors of leaves and flowers. Commonly grown cultivars of Loropetalum chinense include: