There are so many cosmetics, herbal extracts and natural products in the market that you can use for various healing effects and medical benefits that they offer. Most of these plants are not very hard to find at your local. You can also buy these plants online and easily grow them in your own garden.

Here is a list of some common and easy to grow medicinal plants you should try.

Aloe vera is used for preparing various face packs and masks. Aloe vera gels are great source of Vitamin A, B1, B2, B6, B12, C, and E. Apart from these vitamins, it also has minerals like iron, zinc, copper, sodium, potassium, manganese, and magnesium. Just extract the gel from its leaves and apply it directly on face and hair for that shine. Old tissues of your skin are rubbed off and newer ones generate with this application of gel and that’s how you get a fabulous skin. Sunburn spots and dark circles or for that matter any kind of dark spots are alleviated with this gel.

Lavender has many healing properties. It can not only improve your skin but also your mood and sleep disorders. The anti-bacterial and anti-inflammatory properties of this plant gives you a blemish free and scar-free skin.

Rose petals are a great source of Vitamin C and that ensures that you have a soft and smooth skin. As a toner, rose water, is used since a very long time. It alleviates rashes and inflammation.

Tea tree has anti-viral and anti-fungal properties. Tea tree oil is an important ingredient in many skin care products available in the market because it enhances that natural glow of the skin and also removes dark spots.

Infusing the chamomile petals in your tea would bring in a massive change in your state of mind and body. It also rejuvenates skin as well as acts as an effective relaxant for sending you to a sound sleep.

Aspalathus linearis is a shrub the Fabaceae family – the family of many popular flowering plants like Liperia, Lupinus and Mimosa. However, unlike its cousins Aspalathus linearis is not common in horticulture. It is rather grown commercially for leaves that are used for preparation of Rooibos tea.

Aspalathus linearis grows as a small shrub and prefers acidic and slightly sandy soil. The plant is characterized by needle-like leaves that are rich source of antioxidants. The leaves are used to brew herbal tea which is like not only for its flavor but also for its anti-cancer properties.

In its native habitat in South Africa, Aspalathus linearis have been consumed by the locals for a long time for its medicinal benefit. The plant is locally known as Red Bush tea. The tea brewed from the leaves of Rooibos is believed to alleviate asthma and allergies making it a useful plant for gardeners. 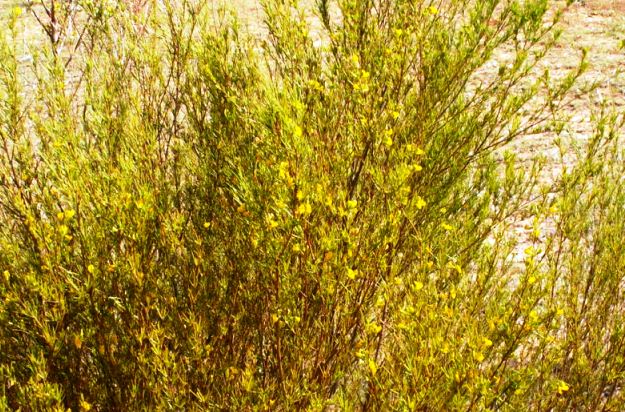 Akebia quinata, popularly known as Chocolate Vine because of its brownish-purple flowers, is a beautiful climber for sunny or partially shaded spots in gardens. Native to the Far East, Akebia quinata grows as a quick climber and makes an excellent specimen for growing over pergolas or against walls where it produces abundance of fresh-green foliage. It can also be used as ground cover. The compound leaves of Akebia quinata are evergreen in tropical climates and semi-evergreen in colder areas. 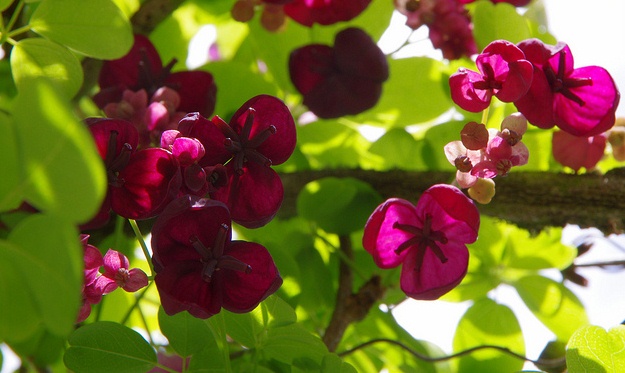 Akebia quinata grows in a slightly moist soil under full or partial sun. The chocolaty flowers appear in spring or summer and emit exotic spicy fragrance with the hint of vanilla. Flowers last longer in warm and dry conditions. Flowering is followed by formation of long pulpy and edible fruits. However, it usually requires two plants of Akebia quinata to fertilize the flowers. The plant can be pruned back at the end of the flowering season. The fruit as well as the plant itself are used in traditional Chinese medicine for their diuretic properties.

Like most Akebias, Chocolate Vine can be grown from seeds sown in spring, or by layering long stems in winter.

Rosmarinus is a small genus of evergreen shrubs from the family of Mint. The genus is best represented by Rosmarinus officinalis, which has been grown for several centuries in the Mediterranean region where it became part of ancient culture, traditions and mythology. Rosmarinus officinalis is an evergreen shrub that grows up to 2 meters and makes a good plant for hedges and landscape schemes. The plant narrow, needdle-like leaves that are intensely aromatic and bitter in taste. The leaves are used fresh or dried for flavor in carious traditional cuisines of the Mediterranean Europe. The plant is also considered valuable in improving memory and stimulating brain. 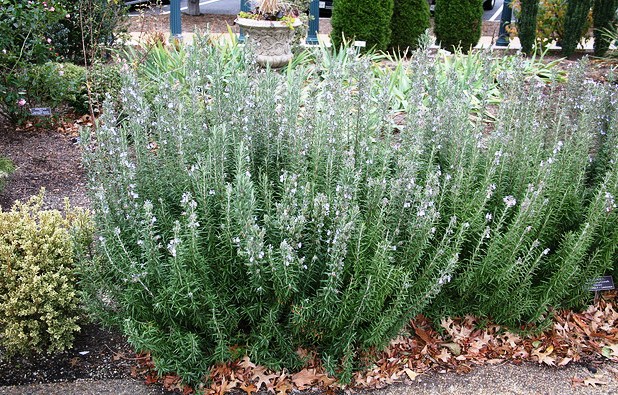 Besides medicinal and culinary uses Rosmarinus officinalis has a significant place in horticulture. It is grown as evergreen shrub for hedges. Since the plant is easy to maintain and prune, it is good for hedges, border plant or as foliage plant in landscape schemes.

Rosmarinus officinalis is quite a tough and hardy plant that survives drought and neglect easily. It can be grown from cuttings or layers as a hardy ornamental plant in landscape or xeriscapaes. Rosmarinus officinalis requires full to partial sun, protection from harsh winter and frost, and a well-drained soil.

Magnolia is a large genus of deciduous and evergreen trees that are popular for their beautiful and scented flowers. This is also one of the longest surviving trees on the planet dating back to about 95 million years ago, that is why mention of Magnolia is found in ancient as well as modern culture and literature. Long before it was introduced in horticulture, Magnolia has been used in China and Japan in traditional medicine.

The genus primarily belongs to Southeast Asia but grows natively in many parts of the world including the Americas and West Indies. 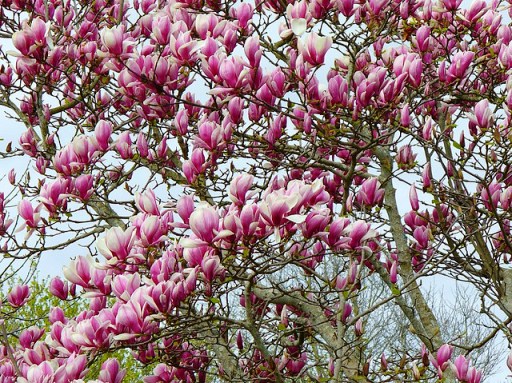 Today, Magnolia is popular among horticulturists and gardeners as an excellent flowering tree. The waxy flowers are known for their beautiful shape and colors and intoxicating fragrance. That is why, it has also been extensively hybridized to produce various new varieties with a broad range of colorful flowers. The most popular and widely cultivated species is Magnolia grandiflora which is an evergreen species with large leathery leaves and magnificent flowers. The plant can grow up to 6 meters in cultivation and as tall as 30 meters in wild. The foliage and flowers vary greatly according to the growing conditions. The size of leaves, flowers and the tree itself depends on the conditions of light, water and soil.

A number of popular cultivars of Magnolia grandiflora are also commercially available. These include:

Salvia is a large genus of shrubs and herbaceous perennials from the family of mint, sage and several other herbs and medicinal plants. With their worldwide distribution, Salvias are grown for their attractive foliage and flowers. Most species have evergreen and often fragrant foliage with small but showy flowers.

Among many popular species, Salvia chamelaeagnea is my favorite plant. It is quite hardy and can be grown as ornamental plant in many different places and growing conditions. It makes a good border plant, a nice choice for large landscapes, or as evergreen foliage plant rock gardens or sandy soils. 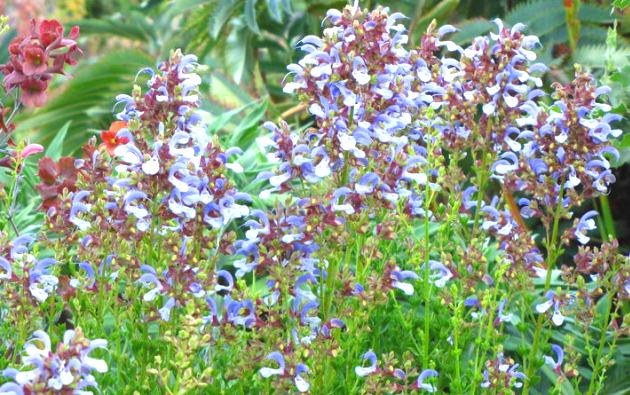 Salvia chamelaeagnea grows as an evergreen shrub growing up to 1 meter or more. The plant produces green leathery leaves that make it a good ornamental plant for gardens and landscapes. Flowers of white or blue color appear in summer that add to the beauty of this lovely plant. Salvia chamelaeagnea has upright growth and can be trimmed easily to keep it in shape. It is propagated from seed or cuttings and grown under full or partial sun in a regular but well-drained soil.

Like many other plants in its family, Salvia chamelaeagnea has been used as a medicinal plant that relieves cough, cold, diarrhea, and colic.

Nepeta is a large genus of perennial plants that grow naturally in parts of Asia, Europe and Africa. Commonly known as Catmint or Catnip, Nepeta grow as small shrubs or subshrubs and herbs. One of the commonly grown species is Nepeta Cataria, which is a good candidate for a nice border plant or ground cover. The plant produces heart-shapes leaves and tiny flowers (of white or lavender shades) that usually bloom in summer. Flowers are fragrant and have purple spots on them. 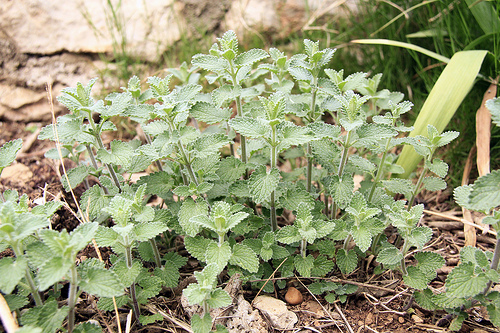 Because of a chemical compound called Nepetalactone naturally found in it, Catmint has long been used in traditional medicine as a sedative. It also acts as natural insect repellent which particularly keeps mosquitoes, cockroaches and termites. The chemical also affects cats and makes them drooling, sleepy or growling.

Nepeta Cataria or Catmint is very easy to grow. Generally, it prefers sunny conditions, moderate watering and a well-drained soil.

Peltophorum is a small genus of quick-growing trees from the family of Fabaceae (the family of Wisteria and Cassia, Robinia and other amazing bloomers). Like other plants from this family, Peltophorum is known for its ornamental flowers that are produced abundantly in drooping racemes of golden-yellow color.

Native to tropical climates of Africa, Peltophorum are grown in many parts of the world as ornamental shade trees. Most popular of all species is Peltophorum Africanum which is commercially known as Weeping Wattle. It is a quick-growing that grows as high as 10 meters and produces a dense crown of mimosa-like leaves.

Crinkled flowers of golden-yellow color appear in summer and last long. Like other trees of the family, Peltophorum loves sunny conditions, well-drained soil and moderate watering. Propagation is done from seeds.

The leaves of Peltophorum Africanum are used as fodder whereas timber is used for manufacturing of furniture. The roots and bark are also used in traditional medicine in Africa. 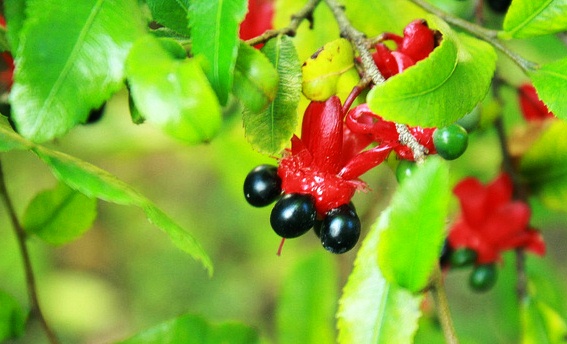 Ochna Serrulata like most of species of its genus produces bright yellow flowers in spring followed by fruition. Most of the species are deciduous plants and prefer sunny spot where they are protected from heavy frost. Though not fussy about soil, Mickey Mouse plant produces rich foliage and blooms when fed properly in a sunny or semi-shaded spot.

Fruit of Mickey Mouse plant is known to be used for medicinal purposes by Zulu people.

Another popular species is Ochna Pulchra which is known for its yellow, fragrant flowers and lovely growth of new foliage that changes colors from pink, red and green.

Vitex Trifolia, often described as Arabian Lilac, is a beautiful and strongly aromatic small tree from tropical regions of Australia and Asia especially Pakistan and India. The plant forms attractive accent plant for gardens both as hedge or small ornamental tree where they can be easily propagated from cuttings or layers. 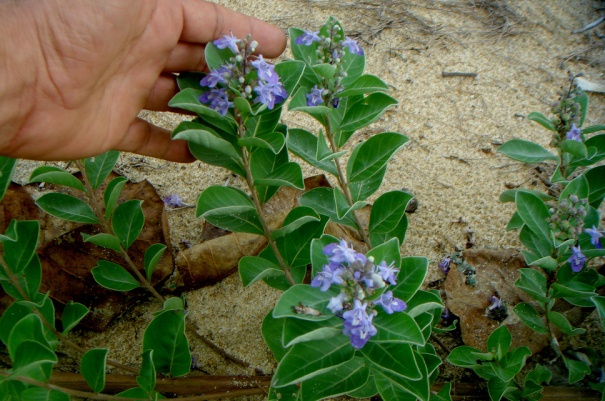 The plant does not have any special requirements and would grow almost in any soil when it receives moderate water and protected from long spells of freeze and frost. Besides its ability to provide attractive and aromatic foliage and flowers, Vitex Trifolia is also used in preparation of traditional medicine for arthritis, inflammations, dysentery, and ulcers.

Depending on growing conditions, Vitex Trifolia can grow quite quickly. Young plants have bushy growth however it eventually grows into a small tree up to 6 meters. Mature plants produce fragrant spikes of yellow, white, red, blue or purple flowers in later summer. If you are looking for a small tree for shade and breaking the wind, Vitex Trifolia would perform very well with bonus of fragrant foliage and flowers. It is also a good choice for embankments or as street plant where it would last longer without requiring much care.